I embarked on a journey to explore the remote Himalayan region of Spiti with Spiti Ecosphere in the month of August. I plan to give readers some insights to this gem of a place in my upcoming blog articles.

Every year, millions of visitors flock to one of the most popular tourist destinations in India- Manali. Here, you find a great number of hotels on each street, tourist cabs populating the roads along with furry mountain dogs. On a regular day during the tourist season, it’s quite a common sight to see families driving up to the Rohtang Pass to catch the snow, adventure seekers flocking to the Solong Valley to enjoy a paragliding tour, visits to the Hadimba Temple, Vashisth Temple and a shopping trip at the Mall Road. Each beautiful on its own. Not far from this resort town, tucked away in the remote trans-Himalayas and disconnected from the choas of the outside world is Spiti.

A journey which goes through one of India’s most dangerous roads, it takes about 12 tough hours to reach the bustling town of Kaza. The road trip is accompanied by a frequent change in terrain, waterfalls flowing along the ghats, the Chandra river, the Spiti river, a few dhabas and mesmerizing views all along.

Travel Tip: The road leading to Spiti is usually closed in the winter months, it’s best to check the weather forecast before planning a road trip. You can opt for a private vehicle (usually a gypsy or a tempo traveller) or an HRTC bus which leaves early in the morning from the Manali Bus Stand.

Before crossing the Rohtang pass, there are several dhabas on the way. If you don’t want to burn a hole in your pocket but also fancy a good breakfast, the delicious aloo paranthas at the Chamba dhaba in Marhi is worth a try.

After crossing the Rohtang Pass on the Manali-Leh highway, one can witness the gradual change in the terrain, thus leaving the Kullu valley behind and entering the Lahaul valley. Lahaul valley is a mix of rocky mountains with snow capped tops, along with a few green patches here and there.

The Kunzum Pass or Kunzum La is situated at a height of 15,060 feet and houses a temple dedicated to Goddess Kunzum who is said to prevent evil. It attracts thousands of motorbiking enthusiasts, trekkers (usually trekking to the nearby Chadrataal Lake, read about it here) and travellers who come here to seek blessings for a safe onward journey. Kunzum Pass separates the Lahaul valley from the Spiti valley.

Enter Spiti valley and one might get a strange feeling on being on another whole different planet. The long roads with no vegetation around, the muddy Spiti river flowing without much enthusiasm, and the tall spikes along the way is not what I expected Spiti would be like.

Spiti, is hidden from the rest of the world. And by hidden, I literally mean it. You won’t even see vehicles on the road and you will often wonder if anyone even lives in this part of the planet. But then you will occasionally come across tiny villages on the way and finally you will see a lot of activity as you approach Kaza.

Travel Tip: Catch hold of fun friends to take along- friends who don’t complain of bad roads and who play good music!

Kaza is the subdivisional headquarter of Spiti and is home to traveller hotels, hostels, artsy cafes, souvenir shops. The bustling market place welcomes traders from all over Spiti and Himachal to sell warm jackets, scarves, vegetables and other food items.

After finally making it to Kaza, with some severe body pain due to the tough drive, there was nothing more satisfying than taking a hot shower at Osel Rooms and enjoying some warm tea and Thukpa at The Himalayn Cafe.

17 thoughts on “Manali To Kaza Road Journey- A Photo Blog” 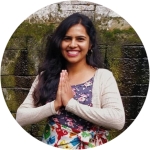 Hi! I’m Meghana. I’m obsessed with exploring new places, meeting new people and spreading as much joy as possible. My passion for travel began when I first visited the Himalayas back in 2011, after that there was no looking back.

I’m a digital marketer by profession and when I’m not doing that, you can either find me hiking somewhere in the mountains, or reading a book by the ocean or gazing at the millions of stars in the night sky (or here)!

I hope you enjoy reading my travel articles as much as I enjoy writing them. I also hope it inspires you to explore this beautiful planet!